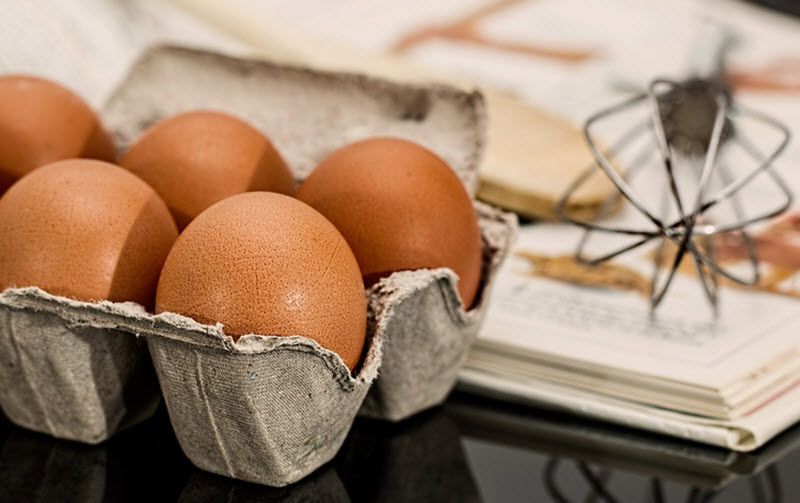 Gallus gallus domesticus is a subspecies of the red junglefowl (Gallus gallus), a bird native to South East Asia. Domestication is believed to have occurred at least five thousand year ago. Today, the chicken is the most commonly kept domesticated animal in the world.

Chicken eggs are used in both sweet and savory dishes, including baked goods. They can be served hard-boiled, soft-boiled, fried, pickled, poached, and more. In some dishes, only the yolk or only the egg white (albumen) is used.

This nutritional profile is for a 100 gram serving of whole hard-boiled chicken egg. For edible portion only, not shell. Percentages are based on dietary recommendations for adults.

As you can see, the egg is high in fat and protein and low in carbohydrates. It is also a good source of various vitamins, especially vitamin A, B2, B5, B9, B12, D och choline. When it comes to minerals, the egg is rich in iron, zinc and phosphorus. 400 grams of whole hard-boiled egg will give an adult the recommended minimal daily intake of phosphorus.

An egg is considered a complete source of protein, since it contains all the eight essential amino acids, acids that the human body needs but can not synthesize. 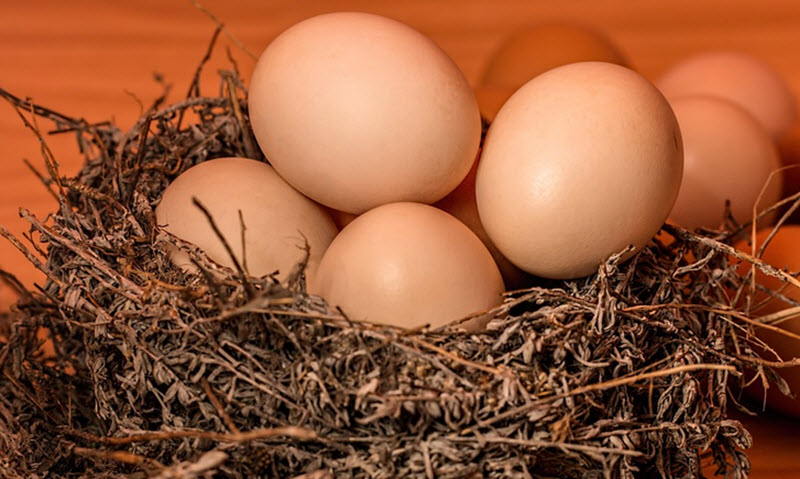 Eggs are a good source of protein, and they tend to be low in price compared to other similar sources of protein. More than half of the protein is found in the egg white. The egg white is also a rich source of vitamin B2, vitamin B6, vitamin B12, selenium, zinc, iron and copper.

Some egg producers feed their hens a special diet to bring up the omega-3 fatty acid content of the egg yolk.

Eggs, our hearts and the cholesterol conundrum

During the late 20th century, the egg – and especially the egg yolk – was vilified due to its high cholesterol content. Since high levels of cholesterol in the blood was linked to an elevated risk of heart disease, it was surmised that eating foods high in cholesterol could be harmful.

Today, it’s clear that the situation is more complicated than simply:
cholesterol in the diet → cholesterol in the blood → heart disease.
More research is needed before we can begin to understand the whole picture, and also how different types of cholesterol balances each other in the human body.

Interestingly, the cholesterol content in eggs produced in the United Kingdom has actually dropped significantly compared to 1980s levels. This drop is believed to be linked to changes in hen feed production prompted by the BSE crisis of the 1990s. A medium-sized UK egg now contains roughly 100 mg of cholesterol.

The egg is no longer seen as a main culprit when it comes to poor heart health. Quite contrary, it is hailed as an ingredient that – in suitable amounts – can aid heart health since it is so rich in betaine and choline.

Eggs are a good source of choline. An adult man needs a minimum of 550 mg/day of choline, while an adult woman needs a minimum of 425 mg/day – unless she is pregnant or breastfeeding. Pregnant and breastfeeding women need considerably more choline since choline is required for the proper development of the brain and nervous system of the fetus and of the young child.

One 50 gram egg (edible part) will provide you with roughly 150 mg of choline.

Examples of foods that contain more than 100 mg of choline per 100 gram of food. 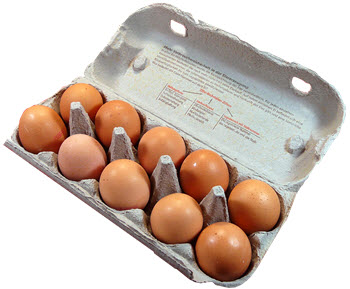 Previously, choline was considered a vitamin and sometimes referred to a vitamin J. Today, it is classified as an essential nutrient. The human body can not produce choline – we must get it through our diet to remain healthy. Sometimes choline is grouped within the B-complex of vitamins.

The most common sign of choline deficiency is fatty liver and hemorrhagic kidney necrosis. Choline plays an important role in reducing the risk of neural tube defects.

Choline is the precursor molecule for the neurotransmitter acetylcholine, which is involved in many functions in the human body, including memory and muscle control.

In a 2005 survey published in the American Journal of Clinical Nutrition, only 2% of postmenopausal women included in the survey got the recommended choline intake from their diet.

Salmonellosis is an infection caused by Salmonella bacteria. Common symptoms are diarrhea, fever, vomiting and abdominal cramps. Since large-scale vaccination of chickens commenced in the United Kingdom, the number of individuals infected with salmonella from eating eggs or poultry in the UK has dropped to very low levels.

In countries were Salmonella is still common, one needs to be more cautious about ingesting raw eggs. Cooking the eggs to 68–72°C will kill the Salmonella bacteria.