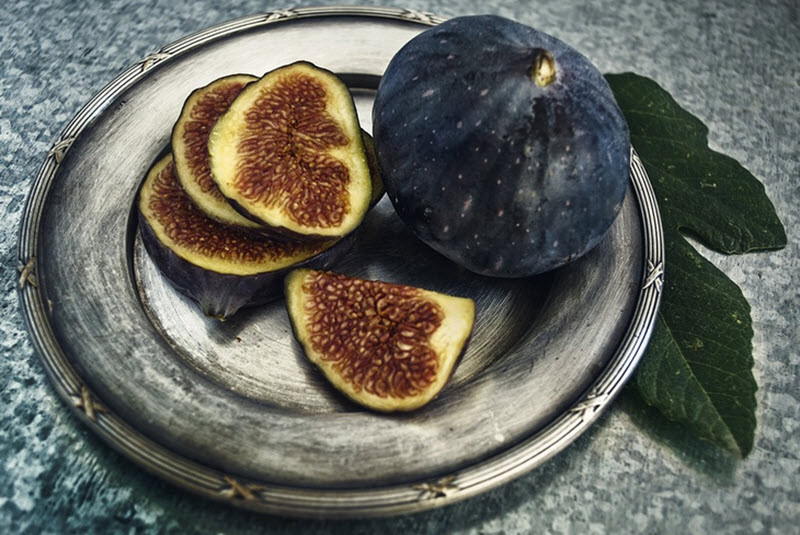 The common fig (Ficus carica) was one of the first plants to be cultivated by humans and it has been an important crop in the Middle East and western Asia for several millennia. The fig can be eaten fresh, but also dried. Dried figs can be stored and provides us with food even outside the normal fig season. In parts of Europe where there is no commercial cultivation of figs, dried figs have traditionally been much more common than fresh figs, since fresh figs do not handle transport and storage well.

A 100 gram serving of dried figs is a great source of fiber. It will typically provide an adult with at least 20% of the recommended daily fiber intake.

Eating a large amount of figs can have a laxative effect.

One 100 gram serving of dried figs is a rich source of the essential mineral manganese and will provide an adult with roughly one quarter of the recommended daily intake of manganese.

On average, a 100 gram serving of fresh raw figs that contains 240 mg of potassium will contain just 1 mg sodium. Figs can therefore help keep the important balance between potassium and sodium in the body. Many of us consume too much sodium and too little potassium, upsetting this important balance and increasing the risk of hypertension (high blood pressure).

Manganese is a required trace mineral for all known living organisms.

Manganese (not to be confused with magnesium) ions function as co-factors for a large variety of enzymes. Manganese enzymes are particularly essential in detoxification of superoxide free radicals in the body.

Differently colored cultivars of the common fig can vary greatly from each other in their anthocyanins content.

Figs contain high levels of oxalates. If you have a history of producing oxalate-containing kidney stones, keep your fig consumption low.

Figs are often eaten as they are (fresh or dried) but can also be included in food. They have a chewy texture and contains slightly crunchy seeds. Different cultivars exhibit slightly different textures.

Due to their sweetness, dried figs can be used as an alternative to other sweeteners in many recipes. Before the advent of refined sugar, figs were extensively used as a sweetener.

If you are buying fresh figs, look for ones that are plump and soft, smells sweet, and free from bruises. If the fig smells sour, it is over-ripe. If there are no ripe ones available, you can buy a slightly under-ripe one and leave it to ripen in room temperature for one or two days. Fresh figs should ideally be served at room temperature rather than fridge cool, since cold figs are less flavorsome.

The high season for fresh figs grown in the Middle East and western Asia coincides with the British summer and fall season, with different cultivars being harvested at different times. 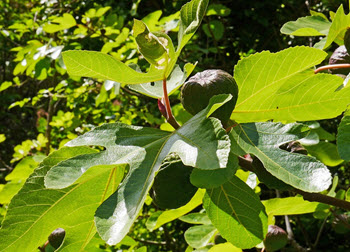 About the common fig

The common fig (Ficus carica) is one of several hundred ficus species native to tropical and subtropical parts of the world. Native to the Middle East and western Asia, it has been cultivated since prehistoric times.

The common fig has the capacity to produce two crops per year. The first crop, known as the breba crop, develops in spring on last year’s shoot growth. The second crop, which is considered the main crop, develops in the summer on the current year’s shoot growth and is ready for harvest in late summer or early fall. This second crop tends to be superior in quality, although some cultivars (e.g., Black Mission, Croisic and Ventura) are known to produce excellent breba crops.

Nine sub-fossil figs of a parthenocarpic (and therefore sterile) type of fig was found by archeologists investigating the early Neolithic village Gilgal I in the Jordan Valley, north of Jericho. These figs were dated to approximately 9400 – 9200 BC. It is proposed that a sterile but desirable type of fig was intentionally planted and cultivated. The first known cultivation of wheat and rye occurred about one thousand years later.

Texts from Ancient Rome show us that the fig was a popular food among the Romans. In his farming manual De Agri Cultura, Roman senator and historian Cato the Elder lists five different strains of figs grown at the time: African, Herculanean, Mariscan, Saguntine and Tellanian.

For a long time, figs were only grown in a band going from Afganistan and India in the east to Portugal in the west, but from the 1400s and onwards fig cultivation spread to other parts of the world, including Northern Europe and certain parts of the New World. A notable event in the British history of fig cultivation occurred in the 1500s, when Cardinal Reginald Pole introduced fig trees to Lambeth Palace in London.

The common fig is a so called persistent fig, which means that all the flowers are female and that it doesn’t require pollination to produce fruit. Fruit is developed through parthenocarpy.