The common oat (Avena sativa) is a cereal grain. Oat has a hard outer husk (chaff) that should be removed before the oat is eaten. When the husk has been removed, the remaining bran-covered oat grain is called oat groat and is a whole-grain food. Oat groat is included in certain recipes, but it is much more common to eat oats in the form of oatmeal, rolled oats or steel-cut oats instead.

For the health concious brit, oats is a locally produced food with numerous health benefits. We often look to exotic imports like quinoa and chia to promote our health, while overlooking what’s growing right under our nose. During recent years, oats have gone through somewhat of a revival in northern Europe and is today hailed as a super food capable of helping us manage both blood pressure and cholesterol levels, while simultaneously providing us with fiber, protein, B-vitamins and the essential mineral manganese.

Data from the year 2013 show us that the United Kingdom is one of the top-ten producers of oat world wide. 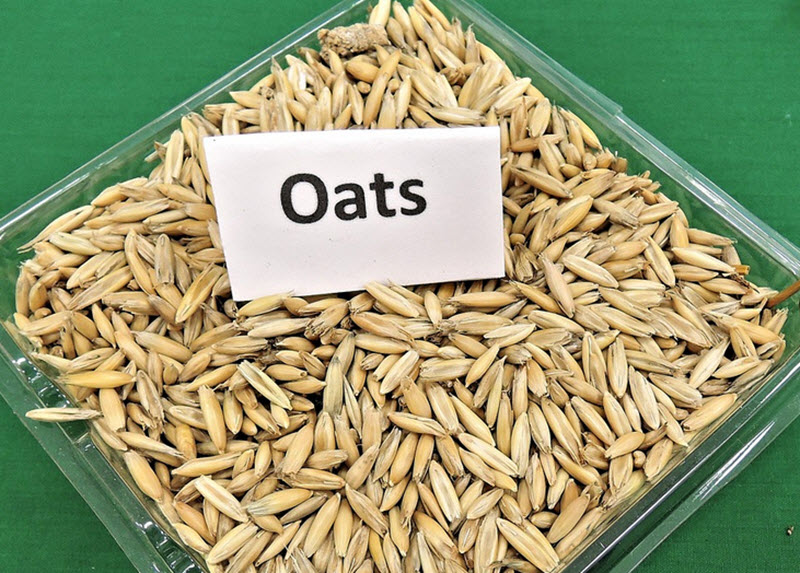 Percentages for daily recommended intake are roughly approximated using US recommendations for adults.

Oats are rich in fiber and several essential nutrients, and oat β-glucan can help reduce bad cholesterol. An average 100 gram serving of oats contains over 40% of the minimum daily dietary fiber intake recommended for adults, although the exact number will vary depending on how the oats have been processed. A less known fact is that 100 grams of oats can provide an adult with 30% or more of the daily recommended protein intake.

Oats are also rich in B-vitamins and certain minerals, including manganese. A 100 gram serving of oats will typically provide an adult with more than double the recommended minimal daily amount of manganese.

When it comes to lowering total and low-density lipoprotein (LDL) cholesterol, the key factor in oats is β-glucan, a soluble dietary fiber that is found in the oat’s endosperm cell walls. As early as 1997, the U.S. Food and Drug Administration stated that β-glucan soluble fiber from oats can be used to reduce plasma cholesterol levels and lower the risk of heart disease. In 2004, the United Kingdom Joint Health Claims Initiative (JHCI) made a similar statement, allowing a cholesterol-lowering health claim for oat β-glucan.

Analysis of multiple studies suggests that at least 3 grams of oat β-glucan per day is required to reduce plasma total and low-density lipoprotein (LDL) cholesterol levels by 5-10% in normocholesterolemic or hypercholesterolemic individuals.

Oats are the only cereal containing avenalin as the major (80%) storage protein. Unlike more typical cereal proteins such as gluten, avenalin is characterised by solubility in dilute saline. From a nutritional perspective, the protein in oats is nearly equal to soy protein.

The protein content of oats is stated as 16.9% in the table above, but that’s just an average for commonly sold oat products. In reality, anything from 12% protein to nearly 25% protein is considered normal for oat groat (the kernel, what’s left when the hull has been removed). 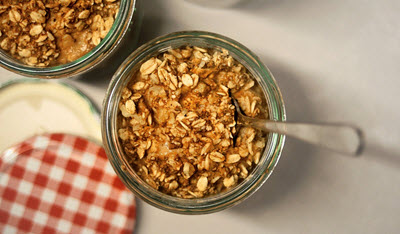 Oats grow best in temperate climates. Compared to wheat, rye and barley, oat is more rain tolerant and has a lower summer heat requirement. This has made oat an important crop in parts of Europe where the summers are cool and wet. Its dominance were even greater earlier in history, before the advent of the modern wheat variants that are more resilient to rain and lack of warmth than traditional wheat.

Rolled oats are oat groats that have been de-husked, steamed and rolled into flat flakes under heavy rollers, before being lightly toasted. Toasting them helps stabilize them.

Steel-cut oat is commonly known as Irish oatmeal, pinhead oats and coarse oatmeal. The groats have been cut into smaller pieces (typically two or three) before being steamed. Part of the bran layer will remain, which makes the product more nutritious but also more difficult to chew. The bran contains an enzyme that increases the risk of the oatmeal going rancid. This enzyme can be denatured by steam. Steaming will make the oats softer and allow for a shorter cooking time. This is how modern quick oats are made.

Ground oats is another alternative if you want oats that cook quickly.

Steel-cut oat groats that haven’t been steamed, rolled or grounded will typically need at least 20 minutes of cooking to turn into porridge, unless you have soaked them in advance which is known to cut the cooking time in half.